Sports Toto Malaysia Sdn Bhd was first incorporated by the Government of Malaysia in 1969. Then, on 1 August 1985, a significant milestone was made in the gaming industry when the company was privatised. Today, Sports Toto is a wholly-owned subsidiary of Berjaya Sports Toto Berhad, which is listed on the main market of Bursa Malaysia.

Today, Sports Toto is the largest number forecast operator in the country both in terms of number of outlets and product offerings. It has approximately 680 sales outlets offering a total of 8 games i.e. Toto 4D, Toto 4D Jackpot, Toto 4D Zodiac, Toto 5D, Toto 6D, Star Toto 6/50, Power Toto 6/55 and Supreme Toto 6/58. It is also the sole licensed national lotto operator. Sports Toto has a steadfast commitment as a responsible corporate citizen. Since its inception, substantial contributions have been made in various CSR areas such as charity, community sports, education and cultural promotion. In line with our philosophy of promoting a caring society, we constantly lend our hands to the underprivileged. We continue to support and nurture sporting excellence in the country through huge annual contributions to the National Sports Council and active participation in numerous community sports initiatives. 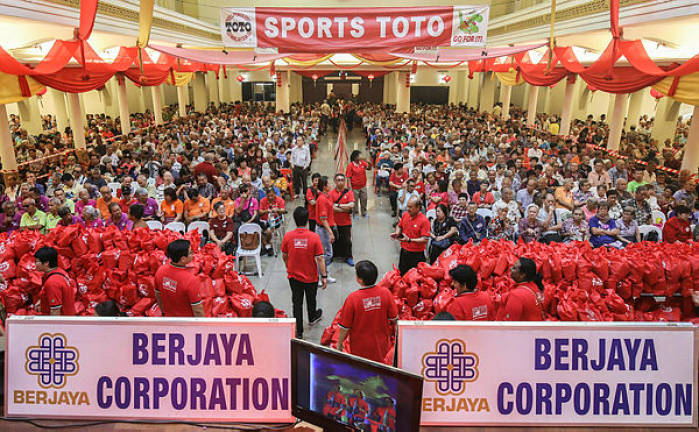 Toto draws are conducted three (3) times a week, i.e. every Wednesday, Saturday and Sunday for its digit games (Toto 4D, Toto 4D Jackpot, Toto 4D Zodiac, Toto 5D, Toto 6D) and lotto games (Star Toto 6/50, Power Toto 6/55 and Supreme Toto 6/58). Toto draws are held at the company's draw venue located at Level 13, Berjaya Times Square, Kuala Lumpur. It commences at 7.00pm and is conducted in full view of the public. Due to regulations, admission is only granted to non-Muslims above 21 years of age.

Members of the public who are above 21 years of age, non-Muslim and are of good character are invited to sit as the Panel of Judges. This panel comprises of three (3) members, one (1) of whom shall be the Chairman. They are responsible for witnessing and verifying the winning numbers drawn for the respective games. They also serve as an independent party that ensures the draw is conducted in a fair and transparent manner.

The public are also invited to participate as drawees in the draw. Similarly, they must be above 21 years of age, non-Muslim and of good character. Five (5) persons will be selected. They will select the marble bags that will be used for the draw. These marbles will then be loaded into the draw machines by an independent observer witnessed by the Chairman of the Panel of Judges. These drawees will also be called upon to draw the winning numbers for the respective digit and lotto games.

Toto draws employ the use of pneumatic draw machines which have transparent tubes, chambers and body thus allowing a transparent view of the entire loading, mixing and selection process. Toto draw commences with the lotto games (Star Toto 6/50, Power Toto 6/55 and then Supreme Toto 6/58) followed by the digit games (Toto 6D, Toto 5D, Toto 4D, Toto 4D Jackpot and then Toto 4D Zodiac). The winning numbers drawn for the Toto 4D game are also used to determine the winning combinations for the Toto 4D Jackpot game. The entire Toto draw proceedings are video-taped and the recordings are kept for a fixed period of time.

When not in use, all Toto Draw machines, equipment, marbles and paraphernalia are kept in a secured and restricted area that is under physical and technical surveillance.

Toto draws are conducted in full view of the public, by the public themselves, observed and presided over by a Panel of Judges who are also members of the public. These endeavors are aimed at ensuring that Toto Draws are conducted with the highest standards of transparency and integrity without any compromise in security. Our practices and procedures are also regularly reviewed by internal and external parties to ensure compliance with the industry's best practices and control requirements.